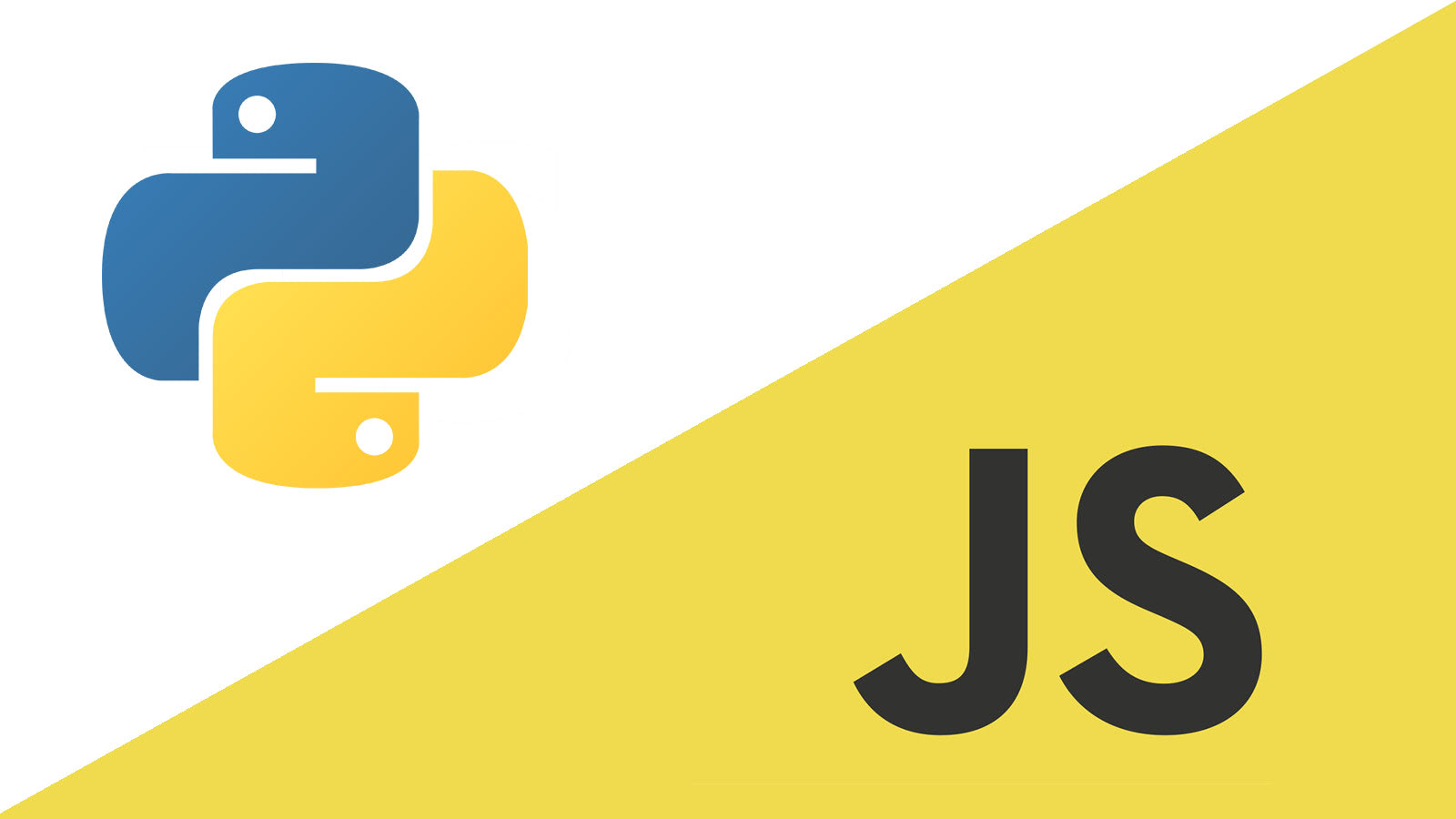 Python vs. Javascript: Which is Right for You?

Python and Javascript are perhaps two of the most popular and in-demand languages today. Over the years, both languages consistently placed in the Top 10 of the TIOBE Index, listing the top programming tools in use.

The reason for their high ranking is simple – Python and Javascript are easy to learn, yet powerful enough for high-performance websites and enterprise applications. In other words, you can’t go wrong with either one of them.

Of course, this begs the question: should I learn Python or Javascript? Is one better than the other? This article will discuss Python vs. Javascript in detail. However, before we get into the nitty gritty, let’s look at each language separately.

Python is a powerful, high-level, object-oriented language that can be used to build any application. It was developed by Guido van Rossum in the 1980s when he envisioned a successor to the ABC language. Subsequently, the world got its first Python release in 1991.

Python was created from the ground up to be one of the easiest languages to learn. Its development was based on a set of design philosophies enshrined in the document The Zen of Python. Among the many principles are “readability counts” and “beautiful is better than ugly.”

As a result, Python has an incredibly simple syntax that’s very close to English, thus making it intuitive for beginners to understand. An added benefit of this is that Python is also very readable, facilitating debugging and collaboration between developers.

But despite the perceived simplicity, Python is used in many complex applications. For example, it’s a favorite among data scientists and mathematicians for building their software without getting bogged down with the programming.

The reason for this phenomenon is two-fold.

The first is that it’s incredibly fast to program in Python. Thanks to the ease of use and readability, developers can easily churn out advanced software in record time. This is also a boon for rapidly testing ideas through prototypes and MVPs (minimum viable products).

The other is that Python is highly extensible. In reality, the language only has a small core, with most of its functionality included as modules and third-party libraries. This allows developers to build applications without having to code key functions from scratch. Thus, Python code tends to be concise. And thanks to Python’s big community, chances are that there’s already a library for virtually any function you need.

Python, of course, isn’t without its cons. One of the biggest is speed. Python is interpreted line by line, which can lead to slower execution. This makes it less ideal for real-time applications where speed is paramount.

But is Python good for web development? Yes, but only on the server-side. Languages like Javascript do a better job at client-side interactivity.

Not surprisingly, the speed issue also makes Python less popular for mobile applications. Now, there are libraries like Kivy and BeeWare that facilitate the development and performance of iOS and Android apps using Python. However, the performance is still inferior compared to languages like Java and Swift.

Javascript is arguably one of the most ubiquitous languages in use today. It’s so popular that 97% of websites use it. The Javascript engine is also a default feature of every major modern browser.

But what is Javascript exactly? It’s a scripting language instead of an object-oriented language, which means it’s used to automate static elements, such as the Document Object Model (DOM) for HTML pages. So whenever you see pop-ups, animation, and form validation in web pages, you’re seeing Javascript out in the real world.

So, is Javascript easy to learn? Fortunately, it is. Many experts advise beginners to start with Javascript when learning how to code. It’s a runtime language, so you don’t need to compile the application before running it. Thus, code changes you make will update instantly in real-time.

Javascript also requires almost zero setup to use. You don’t need to install any software packages or compilers. All that’s required is your browser and your computer’s note application.

One of the reasons why Javascript is so popular is due to its flexibility. While traditionally excelling at client-side scripting, technologies like Node.JS now allow developers to use Javascript in server-side and even standalone applications. You can even use your Javascript knowledge when learning its object-oriented cousin Typescript since the two share the same syntax.

Nevertheless, Javascript is primarily used in web development for both client and server-side scripting.

Javascript, like Python, is also a dynamically typed language. This means that you don’t need to state the type of variables you use explicitly – these are inferred through your code. So, for example, using the “+” operator on an integer will add the numbers together. In contrast, using it on a string will join them.

However, this is a double-edged sword. On the one hand, this can make programming easier for beginners. But, on the other hand, there’s also the risk of using the wrong variable type, which can introduce unpredictable results. And because Javascript will not flag type mismatches as an error, you’ll have a harder time debugging your code.

Security is perhaps one of the major disadvantages of Javascript. Since client-side Javascript code is visible to the end-user, bad actors can easily study it and potentially exploit any vulnerabilities. Javascript also has relatively poor native debugging tools, making error checking difficult.

Python vs. Javascript: What’s the Difference?

Now that we’ve summarized a few of the key details of Python and Javascript, let’s jump into the differences between each.

We’ve already talked about how Python and Javascript are easy to use. But when compared side by side, many programmers agree that it’s easier to pick up Python vs. Javascript. The syntax is much more akin to English, and the use of indentation is more intuitive and readable than Javascript’s curly braces. Plus, Javascript has more complexities than Python.

However, the fact remains that Javascript is still an easy language to learn and well suited for novices. So if you decide to jump from Python to Javascript in the future, it won’t be a massive hill to climb.

Next up is scalability, where Javascript excels, partly thanks to Node.js and its support for asynchronous programming. This feature enables Javascript code to handle a large number of concurrent users.

Python also supports asynchronous programming, albeit indirectly through coroutines. Though not as efficient, Python’s approach seems to be good enough for large-scale apps like YouTube.

When it comes to the Javascript / Python versatility debate, many point to the former as the winner. Indeed, its use as both a front and back end language certainly supports that fact. But Python’s domain is by no means restricted or limited.

Python is the preferred language if you plan to enter into “number-crunching” applications like data science and artificial intelligence. This is also why it’s a popular language for fintech, especially when financial modeling and forecasting are involved. Not to mention Python is also a popular language for enterprise-level web development and ERP systems.

Python also boasts a much more extensive library for functions. Javascript is limited in this regard. Some browsers and operating systems also provide additional functions, but not as numerous as that of Python.

On the more technical side, Javascript and Python support modern programming paradigms and features. For instance, both have mutable data types, which are variables that can be changed once assigned values.

However, Python has a bigger advantage in that it has more numeric data types, including float. It’s the reason why it’s much more suited for mathematically-intensive applications. Javascript, in contrast, only has two.

Python or Javascript: Which One is Right For Your Project?

Now that you know the differences between Python and Javascript, is one better than the other?

The short answer is no. Python and Javascript are both fantastic programming languages, each with advantages and use cases. And the key to bringing out their best qualities is to know when to use them. So, the question you should be asking is, “Which one is the right fit for my project?”

For front-end web development, it’s still better to go with Javascript/HTML vs. Python. There’s no beating the speed and ubiquity of the former. Server-side scripting is where Python might get a nod. However, if you’re already using Javascript for front-end development, it will make sense to also use a server-side technology based on it, like Node.js.

For real-time applications where responsiveness is essential, the faster Javascript also provides a bigger advantage. This is truer with the introduction of the Google Chrome V8 Engine, which improves the speed even further. Consequently, that makes Node.js faster when compared to Python.

But if you’re looking to build complex applications, Python might be a better choice. It’s much more readable than Javascript, even when the lines of code get long. Python’s extensive library is also a huge advantage for bringing apps to market faster.

In the end, it all comes down to your project and needs. Unfortunately, knowing which programming tool to pick isn’t always straightforward. It’s better to get the advice and opinion of an experienced developer to guide you through the process.

Expedition Co. is not just a developer you hire for a project, but a true collaborator to bring your vision to life. We flesh out the requirements, product, and launch plan to ensure that your web project has the best chance to succeed. And as a full-stack developer, we know the best tools for your front and back-end needs.

Interested in collaborating with us? Get in touch today to learn more about our web development services, and let’s start a conversation.